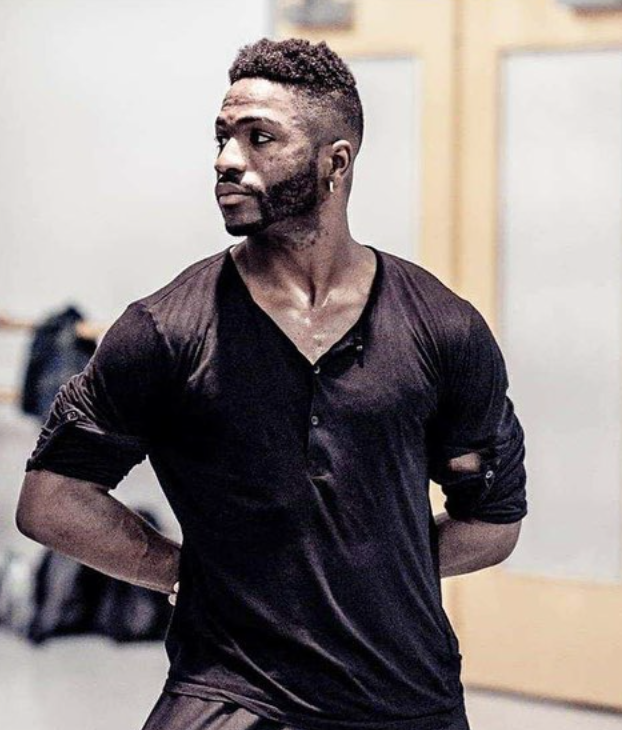 It started back then in middle school. I went to something like a talent show, I just rounded up a few of my friends, and they said they wanted to do something. All right, cool. Let's just create a little dance routine, obviously looking back we didn't know what the heck we were doing. So I think that's when I first really wanted to jump into it, but then I really actually dove into it a little bit more when I went into high school because I didn't have any dance classes before. I mean, I went to the Alvin Ailey summer camp, not the one in New York but the one that was in Boston. I went to that, and that really sparked more of an interest to pursue dance, I would say. I finally started taking dance classes in high school. That's when I met my mentor Erica Short, I still love her to this day. She's so cute. I went to the Reach Program and met some of my other mentors, too. I lived with one of them for a while and he taught me everything I need to know about dance.

That’s a bit of a big question. I guess I’ll start with being comfortable being a dancer around some of my family members. When I first started getting into it, I knew that a lot of my family members weren't going to be pleased with it just because of the fact that I come from Jamaican everybody always thought like a male dancer loves ballet and all that other good stuff. They tend to, you know, think that you're gay and question things. They don't really don't really like to coexist with that culture. I didn't really care for that. I just really wanted their respect, essentially, and I wanted their approval. Once they saw me really pursuing it more and they saw how successful I was, essentially, they were like, alright, well, I guess I can give this a shot. They stopped second guessing my sexuality. That’s a  big thing in the male dance community, they're like oh my gosh every male who dances is gay. No. And even if that was the case, so what? Love me for who I am. It took time for them to grow into what I was trying to pursue and show them that I love dance.

One of the challenges due to COVID-19 is trying to stay in dancer shape. Besides obviously like the money situation, like we all know a lot of people lost their jobs and so on and so forth. As a performing artist and continuing performing artist, I pride myself on always going on stage. The older I get, I'm like hey, I want to be performing like 50, like this is my thing that I want to do. So in taking that three to four month break I was like, oh my gosh I can feel myself digressing physically and mentally and socially and emotionally. I'm just like, okay, how do I try to bounce back from this? I just started like my own mini workout for like 25 to 30 minutes, and then one of my friends actually wanted to work out too so we video chatted while we were doing that. That was pretty cool and kept my sanity at bay as well, just being able to see another human being rather than hearing them through like a headset or a phone sensor. That was a huge thing for me because I think that my physicality is a part of who I am, ever since I started dancing. It was just like a huge thing for me, personally, that gave me security just knowing that I was physically fit.

It’s gotten better because I’m doing these mini workouts and Pilates stuff and workouts that my bodybuilder friend recommended to me. That’s been my saving grace. It’s hard at home, because I live with others, and it’s weird to dance like, in a hallway or take over an area of the house. It’s been great now that they’ve let us in the studio so I can teach my Zoom classes. So, mentally that was like a saving grace for me as well, being able to actually move a little bit makes me feel like myself as an artist. I made a few videos in response to COVID that released my creativity, so that was actually nice to then put choreography on someone else and actually shoot it.

Q: How has the COVID-19 pandemic affected you as a performing artist? What were your initial reactions and emotions to the shutdown?

So, when all of this started getting serious it took a couple days for my studio to be like, hey we’re shutting down. Oh, so like what's gonna happen now? That's when everyone was in the process of transferring over to being virtual, and some studios went virtual but then some just stopped and sent an email that would help us apply for unemployment. There you go. I didn't file for unemployment until later on because I was still working virtually and getting paid for that. And then with BoSoma, that was hard because we had our show three weeks out from when everything actually shut down. And then all of a sudden, boom. You can't perform and I was really looking forward to that show. That was definitely a slap in the face. There was a lot going on during that time anyway so I'm actually kind of relieved that the shows didn't happen, but I think it was bittersweet. More so bitter because of all the hard work myself and the company put into it.

Q: What have you been working on during this time?

I've definitely picked up cooking a little bit more. I've learned a lot of things with cooking, it's always been something that I wanted to do, and I finally had all this time on my hands. I recreated some things my mom and dad used to make. So I've definitely gotten more into the chef industry a little bit and I’m loving it. One of the videos that I did I actually shot it at the studio that I went to to teach at for my Zoom classes. A couple of my students, three of them,I put the choreography on those three, and I based it off of COVID, essentially. That's when a lot of time I really felt like my creativity was getting shot and I felt like I wasn't who I was. With this video I realized that I was still there. We got to do it, let's just obviously keep our safe distance and all that other good stuff. We had all had our masks on, and they just were all black, and it just represented, like I said, they just represented me. So it gave the outside world a look into my head about how I felt about the whole situation. The title was “Drowning” and that's essentially how I felt, I felt like it was me and my creativity, like I was drowning in my passion, like I was drowning inside of my own house. I had nowhere else I could stop, there's no light at the end of the tunnel. My dancers were involved in the video as well. And I was just trying to see how they felt, and what that connection was for them. It was nice to see each dancer express it in the way that they do.

The latest one that I'm actually working on is with my highschool friends, we call ourselves the four brothers. We've been close ever since the 10th grade. My initial plan was, since all of us have our hands in different communities and different parts of work/organization, like us four have a pretty strong following, if you will. We're pretty inspiring and we're all kind of like a leader in our fields essentially. If the four of us would come together, and since we haven't done anything like this in such a long time, it is first of all for the people to see us grow up together in this video, I want to help inspire them to become aware of what's happening in the world right now if you're not already aware. We’re looking at George Floyd and Breonna Taylor, like the unjust killing of black people. There's going to be moving. Oh, I'm hoping to be moving. With people as powerful as the four of us, I think it's going to be.  We have a video location to shoot it. I said it's going to be rugged and raw, which is also what I feel like the world needs right now: there's no silver lining, there's no gray area.