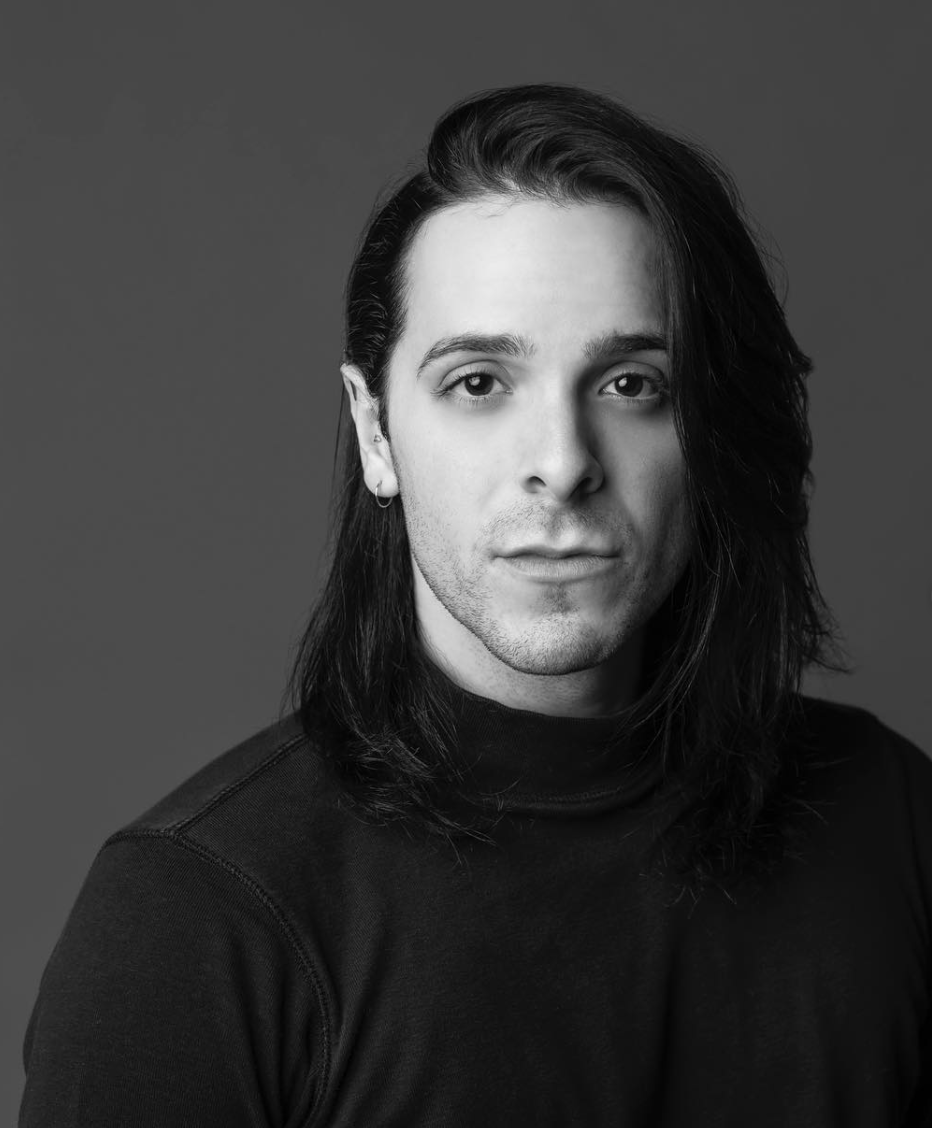 I started out as a gymnast growing up. I was diagnosed with scoliosis so severe they hinted at terminating gymnastics and taking up ballet to help my alignment and posture. It’s one of those genetic things where you don’t really get better, but during your pivotal growing stages you can prevent it from getting worse. I started dance when I stopped gymnastics in middle school. I went to an arts high school, then university in NYC called SUNY Purchase and graduated there in 2017. I had this adopt-a-dancer program where I got scholarships and I did a lot of inspiring rep. Growing up I did all ballet and a little Horton, in college I sunk my teeth into Gaga, Graham, Limon, and all that hot sauce. I studied abroad in Taiwan for a semester because Purchase has a great international exchange program. This was eye opening for me. In and out of college, I did a lot of summer intensives… During this time I made connections with Jacob's Pillow and I met Emily Molnar, director of Ballet BC. I auditioned for Ballet BC. The person who was teaching the rep told me to just do the choreography when I asked a question, and I just fell in love… After I graduated I did Springboard in Montreal; after that I went to Portland to do LAUNCH (NW Dance Project) then I worked with Roderick [George] in Berlin, and that was my first high-caliber real professional experience. We performed in Tel Aviv then went back to Germany.

I auditioned for a ballet company called Ballet Quad Cities in Rock Island, Illinois. I took the contract and moved there — I was there for one season. There was some sort of loaded association with ballet, because I had to use it growing up for medicinal purposes (scoliosis). It was my niche, but I relearned various forms of dance after college. I really enjoyed the process with the ballet company. We did preexisting story ballets, ‘Dracula,’ ‘The Nutcracker,’ etc. All I had ever wanted was to walk into the same building everyday and dance with the same people everyday. There is something about being in college, the ephemerality of your cohort, and then all of a sudden it's over and you crave those relationships. I felt like I needed more time and I wanted to do more contemporary modern dance. I felt like college shaped me on how I wanted to be and lead my life. In college you can shape what you want to do but there is also a heavy pressure to sign a rep company contract right before you graduate and walk out with a 9 to 5 job. This is a pressure that I put on myself. When I started with the ballet company that was all I wanted — to just have that stability. I was not established enough to freelance at the time but I knew I was hungry and driven and I wanted to kick my ass. I feel that when you have the agility, ability, and mental stability you can be a tool while you have the opportunity. I knew I was ready. So after the ballet company I did Hubbard Street’s professional training program under the direction of Alexandra Wells. I did that for two semesters. I feel Hubbard Street Pro prepared you to get a job, not necessarily with Hubbard Street. I also realized I had trouble with aesthetic and how many affectations I had put on myself. I was stylized in such a way that not everyone wanted. Not everybody needs this bendy, androgynous, weird thing you know? I was on scholarship at HS Pro and was cleaning in between my classes. I worked with another smaller company after this for a bit in Chicago. I realized I needed to make money and so I was teaching until 10 p.m. and then I would get up early to dance. It was just insanity.

I got the opportunity to work professionally. The emerging choreographer I worked with at Springboard, Jasmine Ellis, was funded by the Canadian government to set a piece using dancers she worked with at Springboard for the International Dance Festival in Munich. It was such a hot lineup, Forsythe, it was banging. I got to perform in that and it was so incredible. After I finished in Munich, I was in communication with Kibbutz and I had always admired and looked up to the physicality and technicality of the company. When you see people doing something so physically rewarding using such technicality and then putting the artistic integrity on top of it — it’s amazing. I was working in Munich and then I flew to Poland (where Kibbutz was on tour) and auditioned and got the job for Kibbutz. I pretty much shit myself, I couldn't believe it. I could not believe I was a full time company member. I have had wonderful experiences with this and I’ve been so grateful and fortunate and lucky to travel for dance. The thought of doing a semester is tangible but to imagine myself working overseas messed with my head it was so crazy. Different currency, different outlets, obviously there was a language barrier. It was almost like a figment of my imagination. The idea of working overseas was a dream. I am originally from Jupiter, in southern Florida. So I picked up my life and moved to Israel. There’s a lot going on in the Middle East. The company is in a literal kibbutz which is a gated area, and it’s an incredible way of life. It is very rewarding. When you look at the bigger picture of where we are in the Middle East I didn't know what I was getting into. There was a fear of safety that I wasn’t aware of. I had been once to Tel Aviv and I really just did not know what to expect. I had so much support but I am also alone so I had to make my own decisions. I feel like I haven't ever really truly had to live with regret. I always feel like I had this mentality and I knew I would always wonder “What if?” if I didn’t take the job. I have been here for six months and it's my first season.

Yes, I think absolutely. I don't know in what regard what the umbrella term social justice covers directly, so I may sway in the communication of my opinion. Basically there are pieces like Bill T. Jones and Arnie Zane that reference the HIV and AIDS epidemic. There are pieces about the Black Lives Matter movement. There are people doing this art like Yvonne Rainer and Trisa Brown. It’s like the ‘No Manifesto,’ say no to spectacle — get to the bones. I feel like where the world is now making charged pieces is necessary. If you have a platform you should use it properly. Even if you are one small gear in a big mechanism you have a responsibility to strike while the iron is hot and use your voice.

I have a bit of OCD and ADD — having the desire and ability to constantly stay busy is something I have always had. My to-do list mentality, or the OCD, really grew in college and I knew how to shape it and keep it safe and manage it, I knew how to stay busy and get tasks done. In this, I think maybe even bigger than me, this entire millenial/Gen Z generation and maybe everyone, we have never had the opportunity or requirement to not have an end date in sight. A lot of people, especially artists, are goal oriented and task driven. As an artist I feel like this is the first time we have not known when something is going to end. So everyone has this viewpoint that has flipped. Like I put off long-term big picture products because I don’t use time management outside of rehearsals well. I started learning ASL... I have really been diving into this. I did also learn that I work well when I'm given a schedule. To stay on top of my physical capabilities has been really hard. I just haven’t been working out a lot, is what I’m trying to say. I have been trying to expand my mental arsenal of tools. I am trying new things that I wouldn't normally do. I do think during this time it's the first time I have viewed the world this way. I never finished a to-do list and I got through it on day three of social distancing and from that point on I hit a wall. My brain is like what do I do now. How to figure out how you want to manifest that excess time and energy is very new for me.

With Kibbutz, we had a show in Israel that evening and a tour to Germany, Austria, and Switzerland prepared a few days after that. Israel has been aware of the virus and its development but the tour was still planned and everything and set and then we realized how much the virus escalated and found out we couldn't go on tour. Here in Israel the country is very small and it has so much punch. I feel the protection Israel has for such a small country is amazing. I think this country does an amazing job of being proactive and ahead of schedule. We were doing social distancing way before the U.S. The country was proactive and I was confused because the intensity of the virus hadn't even risen that much yet. I realized of course that what they were doing had our best interest at heart. I think the citizens here are also incredibly efficient and everyone has been listening to the government and doing what they are told to be safe. The moment of impact was pivotal because it shaped what the next few months will look like. When we had the Kibbutz company meeting we had a goal time to get back but now that may be pushed back and we just aren't sure.