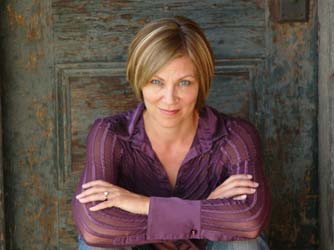 I have worked across the field, from concert dance, to straight plays, to musical theater. I grew up early on, as a gymnast and an actress, and from gymnastics I started taking ballet and fell in love. Growing up, I was taking ballet, jazz, tap, acting, singing, and doing musicals. Then I went to the University of Michigan for a BFA in dance. I was actually in the first class of the musical theater program, so I was a double major in both. I kept leaving, and studied at Boston Ballet as an apprentice in the summer. After my freshman year, I went to NYC for the summer and was cast in the national tour of Sugar Babies, and took off school. I toured with Sugar Babies, and then I was in a repertory company in Kansas, doing plays. I was also bouncing around between concert dance, acting, and musicals. I finally graduated from U of M, went to NYC, and was cast in musicals. I was a dancer, an actor, and a singer third, so I kept getting pulled into musicals. My first Broadway show was Cabaret, directed by Hal Prince and choreographed by Ron Field. I was a swing for the show, and then Ron Field passed away in the middle of the tour, so I inherited the knowledge of the show, and was sent to Europe to set the work there in a European tour out of Amsterdam. At an early age, I moved to the other side of directing and choreographing, seeing the big picture. I fell in love with that side of it, bringing all of my skills together. That was the show that launched my career as a choreographer. After that, I acted here and there. I went to Chicago to do straight plays for a while, but I kept being asked to do Cabaret as a director and choreographer, so that kept taking me back to NYC.

For one of my first creations of my own, I worked at a Music Theater Wichita, and Wayne Bryan was my mentor there. He asked me to choreograph, so I started exploring my work as a choreographer and that grew and grew, and eventually that side of it took over. Ever since my mid-20s, I’ve been directing and choreographing. When I had my second child, I was in NYC, and I had family in Michigan, so I came back for a time. I thought I would be here a couple of years. I got hired in the Musical Theater department here and fell in love with teaching and the students. I found that my professional career continued to flourish—Michigan is very supportive of me directing and choreographing. I still go back to NYC and work professionally, throughout the U.S. and the world. I teach at a program in Italy in the summer. There tend to be these camps of concert dance, tap, and theater; having moved across all of them, the lines are very blurred for me — it’s all just human connection, and no matter the genre, I approach them all the same way. Having worked in all the areas, my experience is richer coming into each of them, as well as my ability to communicate with different kinds of artists. I love whatever I am doing at the time—if I'm directing a play or doing a concert dance piece, that is all I want to do. I love to move between genres.

I almost went to law school, too. When I first went to NYC, there was an economic crisis and only ten Broadway shows. I applied to go to Fordham University for law school, but booked a Broadway show instead and deferred for a year, and then things obviously took over from there. I think it is all richer when things are not compartmentalized. The face of Broadway has changed in the last 10 years—there are more concert dancers, rhythm tap, and musicians on stage. There has been this beautiful blending of forms, and rather than looking at what is there and saying, “Where do I fit?”, you can ask yourself, “How do I create where I want to be?” That is what is exciting about theater — it is a changing landscape. I think your generation will create incredible work.


Q: What have been some challenges in your pre professional or professional dance career? Or as an educator?
‍
My pre-professional time was during a period that is not as devastating as now, but in the early 80’s, there was the financial crisis of that time, so there was not a lot on Broadway. I think one of the challenges is you are often between jobs, and another of the challenges is keeping yourself engaged as an artist—learning how to not look to the job for your artistic outlet, but instead how to see the world everyday as an artist, and how to find the connectivity between everyday life and your expression as an artist. Finally learning that it is not about who you are or your circumstances, but how you engage with the world. That was a challenge, but has been a gift. Every challenge ends up being a gift; it is how we move on and grow. I think, like you, the challenge was that because I had interests across many areas, it sometimes is a challenge to get into certain circles, because there are purists in each circle. Trying to break down walls and judgments in order to bring our work together has been a challenge. Also balancing, especially as a woman, family and work, is also a challenge–the hours spent working in the evenings and being with my children, and trying to put my family first. But it’s also a gift to the children, to grow up close to the theater—it is always both a challenge and a blessing.


Q: Do you believe the arts can be a platform for social justice topics? If so, how? and/or Have you used your art form to make a difference?
‍
Absolutely. The arts have always been a mirror of what is happening in the world and a place where we see ourselves on stage and where we are challenged. There is something about the communal aspect of theater, where we are all sitting in a room together that puts a responsibility on the viewer to be with an entire group of people in a shared experience. There is something powerful about experiencing the theater and having the responsibility of the topics that are discussed. Everyone comes to the theater with their own background. It sounds lofty to talk about social justice in a theatrical platform, but the simplest stories, or even the fluffiest of stories, when someone comes in with the weight of their own things… what they see and what it drives them to do is completely different. The theater is a place that inspires and challenges people. The message of a story is of course important, but it is also what the audience member brings with them into the theater, and how the story on stage moves and shapes them. They could be opposed to what is on stage and then, that may drive them to do something else. To come to have the time and space in the theater to allow yourself to be moved, to be affected, to have that private time to contemplate, is for me a life-changing experience every time. Everything I have ever seen, I come away with something that moves me and changes me.


Q: How has the COVID-19 pandemic affected you as a performing artist?
‍
For me, it has actually been a really restorative time. I am a teacher and I mostly nurture others. I seldom have time to play my piano, to read, to do further research, so personally it has been a very restorative time and a time to go in and sit, and be in the moment without a sense of forward movement and needing to stay up. It has been a really wonderful, quiet time. That being said, I know my privilege—I am able to take this time. I have food and shelter and don't have financial worry. My heart is heavy for so many that do, and I do have so many friends that are sick.

I feel that this is a great time for unity as well. I have been in touch and reached out to people that I may not have before. I lost my mother the Sunday before everything happened, so I’ve had the time to mourn her loss, and I am so thankful she went when she did and didn’t have to suffer through this time. She would have been isolated and I wouldn't have been able to be with her. It is a very strange blessing. The other thing is that the planet is breathing again. I pray that after this, society recognizes the change in our planet from a short shut-down, and policy will follow to preserve that. I hope we don't jump back to where we were before, and instead that this is a wake-up call.


Q: What social changes and responsibilities have you seen people making during the pandemic?
‍
Not enough, actually. Most of what I see around me has been smart social distancing, people being respectful of taking this on as a community. But that is not so across our country, and it is devastating to see how slow the response has been. You do see so much kindness and so much community, being in the Broadway community. I can't tell you the outpouring of love from everyone. Equity Fights AIDS and Broadway Cares have done so much in raising money and taking care of our community. I and a lot of my friends have committed ourselves to paying domestic workers, and I think it is important to do what we can in small ways to help those who are really compromised.


Q: Using the idea of “worldmaking” how do you imagine the performing arts world after the pandemic? (Worldmaking: How you can re-imagine the world in your own terms, the way you want it to be. Using this tool one can construct new worlds and write themselves into narratives that have excluded them and systems that have disabled them.)