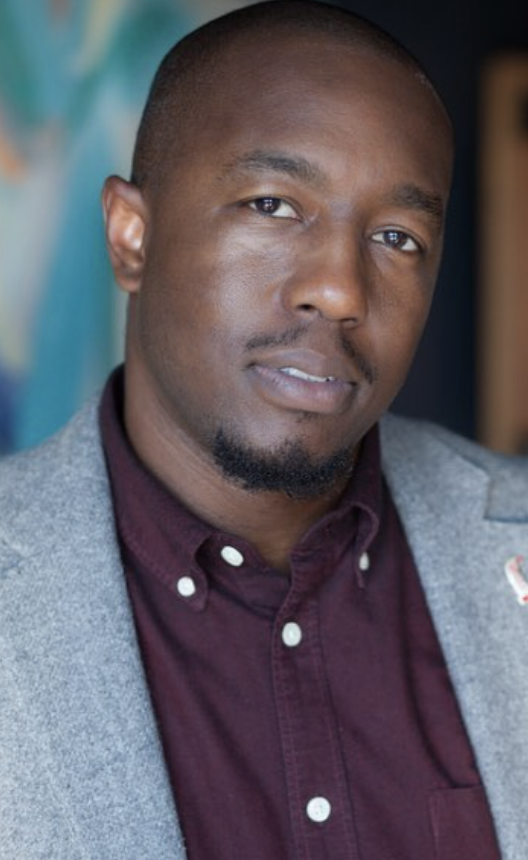 Q: How did your performing arts career begin?

I think in my early childhood there were maybe a couple of performing arts opportunities but I would say that I really found myself in the performing arts in my freshman year of college. I went to Colgate University. I was there playing football and I got hurt and didn't travel with the team so I had a little extra time on my hands. I was asked by another former football player, Will Arnold, to be in a play that he wrote. It was an original play about racial tension in the south; I was a southerner at this predominantly white institution in upstate New York. So I was very connected to the work, and in being in that play I started to see the power of the performing arts, the power of story and live theater on being able to have conversations. I pursued it for the rest of my college undergrad career and then decided to become a professional. There are some other steps along the way but that's the genesis of the journey.

Q: Can you talk a little bit about your journey to becoming an artistic director?

I would say it was a series of happy accidents. Starting with getting into that first show in undergrad, being challenged by friends to write my own story, and then learning how to produce as a small theatre company for artists of color called Urban Theater. Just trying to put all those pieces together. Back in undergrad we were making the connections with the woman studies department at the university to talk about racial profiling or talk about systemic injustice and I knew I wanted to continue that. I took a big risk to become a fellow in a new city at a theater in Washington DC, Arena Stage, and learned what I could for those two years there. Then I took another fellowship out in Minnesota, just to try to soak up what I could learn there and worked for a couple different theaters. Each time I was just trying to find and fill the gap in my knowledge base and figure out what I could do to ultimately get back to what got me interested in theater in the first place, which was telling stories about communities of color and what is culturally relevant in the moment. So after my fellowship in Minnesota, I maintained the relationship with Kenny Leon, who was the founder of this theater that I currently run, True Colors. He served as a mentor to me throughout my career as an artist and as a leader in the field, and as inspiration for what was possible. When I reconnected with him he was looking to transition out of leading the institution and it felt like the perfect opportunity for me to learn from him for a little bit longer and then eventually take over what he had started.

Q: Can you talk about how you bring socially relevant art to the community? Can you speak a little bit about that and your own art making?

I think that an artist is a citizen. They are a member of a community, they are in conversation with so many people throughout their daily lives, so their role as an artist is really to collect those stories of the people in their community, put it through their own filter of artistic output and then share it back out into the world. I mean that's what we’ve been given as artists, we've been given a specific way to see and view the world and share that back out. That's what I think about when I'm trying to create my art, how can I produce the stories of my community and what does that look like.

I think a lot of it has been feeling and desiring more, and feeling that more can be done. I can learn more, I can grow more, I can share more, I can be a better representative of something. But also feeling that throughout several stages of my journey, other people have tried to hold that back. Other people have denied me the access that's needed to advance in this field. I think a lot of it is about access and people denying opportunity, people wanting change to happen slower than I wanted. So I think that those difficulties have fueled me to figure out how I, as a leader, can take away some of those speed bumps that were slowing people down on their journey, or preventing everyone from having equal access. I'm trying to figure out how to do that in my own practice now as a leader.

Q: How do you think the performing arts can be a platform for social justice issues?

Q: How has the COVID-19 pandemic affected you as an artist and as a leader in the field?

As an artist, as a freelance director, I lost a couple of gigs that were actually going to be the biggest directing gigs of my career up to this point. So I think I had to mourn the loss of that, but also recognize that it didn't mean that I couldn't practice my art, it just needed to shift and change. I think as a leader I've always tried to find opportunities to speak to something, be about something, and to do that it requires you to be in the right mindset. For example when you write a play or anything like that you've got to have the right formula of circumstances. This COVID moment has allowed enough rest and reflection, but also engagement, especially like with my wife and daughter here, that I believe I was able to create something different than what I would have been able to create if we were just constantly “go go go.” And that's been nice, just to think about the type of leader I want to be with that type of clarity, that type of recommitment to some of my values. And then, from that, now I've been able to go back, do some more producing at the theater, try to find my way to speak up and advocate for change in my industry, the professional theatre industry. So I've tried to do some more advocacy during this COVID moment. It has really just been a time to reflect on what's important, and then to readjust my artistic lens towards that.

I think this moment of COVID, but also this moment of racial justice, not just in our country but all around the world, has really forced our industry to talk about the ways in which inequality has been pervasive in our field and I've really been trying to use my platform to speak to that. Having both been hurt by and benefited from that system of inequality, I am figuring out how I can be part of, in the leadership roles that I serve, the call and creation of a new system that doesn't devalue people based on things that we should actually value. So, I've been working with groups who are advocating for that type of change. I spoke at a national conference of theater makers, kind of challenging them to rethink the ways we’ve been doing things. I've just really been trying to find different opportunities to use my voice and my platform. Then in my own theater company, True Colors Theatre Company, we've been using our platform to amplify the voices of artists. We have something we’re calling #RealResponses, which is just a tool we’re using to help us signal boost their work. We've been creating videos. We have a podcast series called The True Colors Podcast where we are just trying to get in and connect with our audience and say, “Hey, if we are collecting voices and stories and we're not able to be with you in the present, how else can we stay connected?” And that’s been fun to find ways to respond to this moment in COVID, but also in this moment where we're fighting for equity and equality.

Q: Do you think the pandemic will make us a more socially conscious society, specifically talking about the performing arts world, and if so, or not. How and why?

I think the short term answer is yes, right? Because so many of us are focused on it, and we as a society are very immediate in nature and I think we're good at taking some immediate actions when we want. Long term change? I think that story is yet to be told. That's the one that's scariest for me because it takes such a commitment from everybody to commit to equity on a consistent basis. Historically, we haven't done that. But historically the leaders haven't looked like the leaders that are here now, and that will be coming up shortly. So I wonder if we can be that change, especially with the consciousness that we have now. We know that white supremacy and white privilege have prioritized individuals, and put them in leadership positions that have enacted policies that disproportionately affect black and brown people, heteronormative communities, able bodied communities, etc. So if we know these things and have the right type of intention then, when we are making new policies and changing the way we matriculate people through these programs, we can make that change. I'm excited to see that. I'm working to commit to that myself and challenging everybody to do the same, especially if they're in leadership positions. But I'm asking those who are not in leadership positions to hold other people accountable, hold their leaders accountable, because without that accountability, we can easily skate back to where we were.

Audiences are going to be spread out, but I think it'd be so important for us to maintain connection. I think our theatres are going to be full of connection, although the audience is distant. I think any of us who have played to an empty house or a very small audience before know that we're supposed to give just as much to that performance as we would if it was full. So regardless of how many people are in their audience, the performers are still going to give their full selves, and I think we're going to create those connections in the audience. So I think we're going to be connected. What I'm hoping is that we're smart, and that we don't cut corners, and that we prioritize one another, that we take care of artists. I know it's tough for us but like, if we're backstage, we need to make sure everyone is maintaining their own space enough so that we can get through this to the other side. So I think we'll also be slow, and I think that's okay, I think it's okay for us to be slow with how we come back. What I'm hoping is that we're committed to accountability throughout it. I think it'll be more diverse, I think we'll see stories that we had not been seeing, because people are listening more. But again, if we don't do it with intentionality and accountability I think we may unintentionally cause more harm when we were intending to heal.