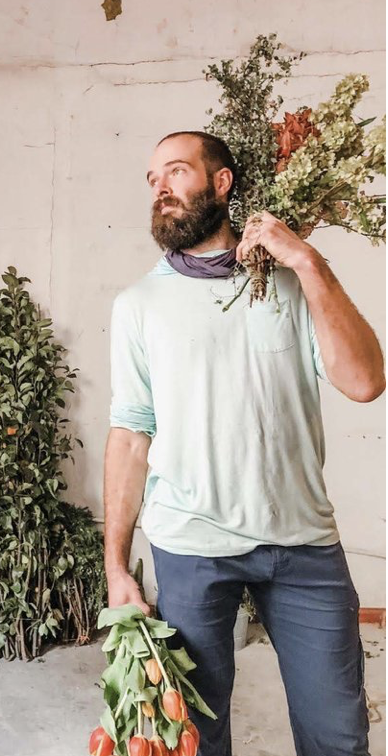 Q: Can you talk a little bit about how you became involved in the performing arts?

Sure. When I was in first grade, my best friend's family started a K-12 Arts integrated charter school. And so, I would say I had no choice, it was just what we had to do. It's what I grew up with, and the performing arts were integrated into the curriculum so I had to take them every day.

Q: what has the performing arts taught you in terms of how you live your life and engage with the world?

I would say that the first thing that the Performing Arts has taught me was the act of engaging in the creative process. It gave me the opportunity to be something that I wouldn't say was, It gave me the opportunity to dream and what it really got me thinking about while I was in school was this idea of the gift of the Performing Artists and the exchange that happens between the artists and the audience.

I know what it gives me and what it means for me to move into Performing Arts. But how do we engage the audience with this gift, what is the gift exchange that happens with them, how do we give them something tangible even if it's a feeling that then allows them to share that with someone else? If that doesn't happen, then in my estimations what was made wasn't a gift. And then, so then it's almost not worth making If it doesn't, in some way, shape or form, give someone something to give to someone else.

Q: As an artistic director, what is something that you've learned in that role, that's made a big impact on you, or some kind of realization?

The thing that I've learned the most, as, as a part of the residency organization is that it's really hard to do things alone, like I knew this going in that it's very difficult to do things alone. But it's been like reiterated over and over and over again but doing something by oneself is not, there's like an intense, an inherent lack of sustainability in doing something alone in the sense that there's not this other energy that's sort like feeding it. And when you slow down or when I slow down. There's not someone that's like helping me lift up. And it's also helped me realize the things that I just have no interest in right very little interest in learning, maybe not no interest but like the things that I'm not that good at, which also I'm like worse at learning that I would be at the things that I find really engaging, which I would be better at learning. And so just knowing the holes that I have, as a leader, but in this sense, a leader of no one good like knowing the holes that I have and wishing and finding the way to fill those, those gaps, whether it's with other people or with like learning things, I really struggle to learn or having trouble learning.

Q: How do you think that the performing arts is a platform for social justice issues?

In a general sense, all art or most art provides that space for decentering. I can present my truth in a way that can have some opportunity to it, it can be very clear, but also minimal so that it's not super direct. And that allows for these concrete conversations to be had in a way with a touch of softness, they don't have to be as sharp, but even its incredibly sharp, It's still not a conversation.

Everyone can have a conversation in a way that doesn't have to feel aggressive or confrontational. And if done artfully, It doesn't have to be something that's that feels like it's attacking anyone.

Q: Can you talk a little bit about how the COVID-19 pandemic has affected you as an artistic- director in the communities that you're in, and what process you were in when the US started to shut down and what that looked like for you?

There's a lot to it, but we were in the midst of planning our 2020 season. You know just waiting to receive information back from all the artists to post on our website to announce it. We had a local gathering that was going to be happening, and I think two or three days after everything got canceled, and we had a local talk that we were planning to do. With all the new incoming information and changes, a lot of emails were sent to our artists for support. Throughout this process, knowing that people were probably struggling monetarily and that people's premiere dates were now being shifted. And also taking into account their safety, health,h and well being. The board made the choice that if the artists choose to postpone because it wasn't going to work for them, to postpone until next year. We would then allow for them to receive their stipend. With these uncertain times so we wanted to support our artists if we could, so that felt like a really good actionable item.

Q: Can you talk a little bit about what you've been doing during this time just in terms of planning for a future if even so that's different or different ways that you and your, you know, board and everyone that works with you has been thinking about performing in the future?

I don't know if I have specific answers, because what I've been trying to do is give as much time and space to the artists for this summer.  I also haven't wanted to move too far ahead with any online engagement opportunities. Because it's so far afield from our mission of physically being grounded somewhere that I’m still. The wheels are still turning, and I have a major dream idea, but not sure of the how the concept would be able to work for the upcoming summer, So it's kind of the back burner for now.

Yeah, I think like I said I'm more concerned about the artists and whether they feel safe and whether they even want to come and how they're going to come before I organize how they're going to be seen. I guess or how they're going to be shared, or how they will engage the dream that I have a guest since we probably have a little time is just based off of an audio. She's an audio and installation artist, Janet Cardiff she does these, like, audio walks. And she also does video walks. And so I had a. I have a dream about it. If some artists are able to come in this summer since we cannot share their work with people directly, we may be able to do it. I may be able to do an extended video walk like find one Nature Preserve. That's close by. Take every artist they're engaged with in some capacity, and then make a full-length video out of this walking through different, whether it will be whether iterations timeframes and dance companies, and then have that something that can be shared with people and they can go through that walk while they walk the walk. But that's just a dream.

Q: What would you like to see change and shift in the performing arts world after the pandemic ends?‍

I've been thing a lot about how the pandemic is increasing access to resources on an online platform. There's this certain level of access that has increased, and this idea of that there's something to unlock, the fact that we're like, Hey, we can use the internet to disseminate knowledge in a way that is not a by Google or Facebook choosing what we see. We can share all the information we want and I'm curious to see how this will continue. With this pause, and then given time to reflect, dream and create is all great but there's still a lot of sadness in that right now. For so many people, losing income, a fear of companies folding and we just don't know when we will be performing again.

Q: What have you seen in the performing arts communities in terms of coming together during this time?

My perspective has been focused on the residency space and how they've been adapting. There has been an overall positive response, with open discussion while sharing information and resources. With our sudden given time and space, it has allowed me to reach out to people in the performing arts community that I don't normally out to and its been really nice rekindling those relationships.

I have some, some good friends in Seattle that are doing a wonderful show that actually, they have another show tonight, where people are performing in place to the residences, and they have like a car out, and I guess you receive like a map, and then you drive the map, and then you park in front of the residents and watch for a little bit and then go on to the next and so that that's been fun to hear about and fun to see.