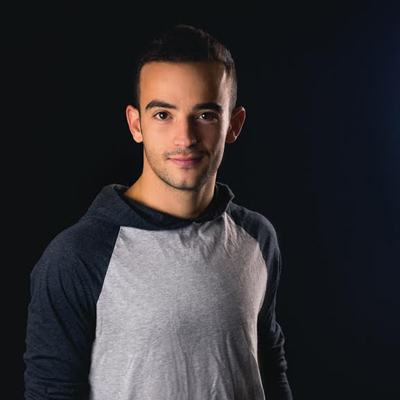 "Number one — I lost my brand new job, which I would have made good money on. (As a dancer), you work so hard to get that one job that will give you enough money to afford rent, and it finally happened for me. Then, within two weeks, it has been put on suspension. That is one. Two, usually as an artist and you lose something, you have a base to fall back on. I can usually fall back on my teaching and choreographic jobs when I don’t have a performance job. Now, I have lost my performance and teaching jobs. I can’t make work with other dancers and I am not making money off of it. And then, I think it affects the artists’ world because we are all sad. The country has become even more divided, and it feels like, not only are you struggling as an artist but also as a human being. The first day, I was like, “What am I going to do?” Then you realize everyone is in the same boat as you. I have been teaching on Instagram Live and holding classes on Zoom, all for free. I think it's important in a time like this to give back where you can. Luckily, I built a foundation where I can afford my living right now, so I am trying not to charge people who are struggling. It hit hard financially — you don't have a lot to fall back on when you're an independent worker. You hope the government can help you. You are not salaried, and you don't have insurance, really. You don't have the place that other people have to feel secure when things get crazy. I think artists have it the worst, honestly. But I am trying to flip the situation to make it better, to feel like I am winning. If you want to create, or teach, or draw, and haven’t had the chance to, you have the time now. This is the perfect time to try all of these things. I have been trying to follow that too by waking up at a reasonable time and giving myself a schedule, but, of course, we would love to go back to work. It's the one thing that keeps us all sane in this world. It all toppled, like a domino effect."

Steven Paul Blandino has a BFA in Commercial Dance from Pace University, with a focus in Choreography. Steven has choreographed a NY Equity Production, National Tour, and has set work at Pace University, Rutgers University, as well as various Dance Studios across the US. Steven is currently on Faculty at Groove National Dance Convention, Impact Dance Adjudicators, and has privately trained Actors for upcoming Feature Films, Productions, etc. Recent Performance Credits include: West Side Story at Houston Grand Opera, West Side Story at Weston Playhouse, Newsies, Mamma Mia!, Shrek at Tuacahn Center of the Performing Arts, Johnson & Johnson, Carnegie Hall’s ‘Take the Stage’, re-staging of Bob Fosse’s ‘Crunchy Granola Suite’, and many more. Steven is also a proud member of the Actor’s Equity Association. His choreography credits include "Ludo's Broken Bride" at the New York Musical Festival (NYMF/The Duke on 42nd St), "Rebel Rebel: The Many Lives of David Bowie" (Canada, National Tour 2017), Burlesque to Broadway (Canada), Association of Performing Arts Presenters (APAP) at Peridance 2018/15, Young Choreographer’s Festival 2015/14, Choreographer’s Canvas 2016/15, Jared Grimes' "Run the Night", Hero Awards: honoring Jerry Mitchell, Kat Wildish Presents, the Alvin Ailey Dance Soirée, and many more. Additionally, Steven was recently nominated for Outstanding Choreography for his work on "Elise: A Musical" (Off Broadway/Planet Connections Festival). Steven has been featured in the NY Times, Front Row Center, TheaterMania, and was recently featured in an issue of Dance Magazine as an Emerging Young Choreographer. Steven has received numerous awards and recognition for his choreographic works, including Young Choreographer of the Year Award at American Dance Awards, and Senior Choreographer of the Year at United States Tournament of Dance. Steven continues to teach, as well as perform/choreograph in both the Commercial and Theatrical industries.